Secure and usable IT for extreme situations? 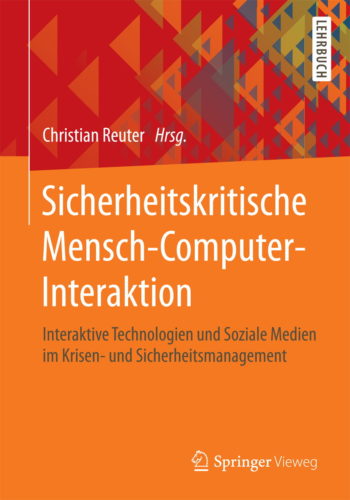 How to deal with so-called „shitstorms“ in social media? How can interactive applications reduce or even resolve conflicts? How can victims contribute to crisis management through IT? How can cooperative systems support police and fire departments? How can IT be both secure and easy to use? These practical questions are addressed by a new textbook edited by Professor Christian Reuter, head of the research group „Science and Technolo-gy for Peace and Security“ (PEASEC) at Technische Universität Darmstadt and mentor of the BMBF group KontiKat at University of Siegen.

As one of the first textbooks at the interface between man and computer in the field of securi-ty, conflict and crisis management, „Safety-critical Human-Computer-Interaction – Interactive Technologies and Social Media in Crisis- and Security Management“ was published by Springer Vieweg in January 2018. The book deals with a topic of high interdisciplinary relevance and was therefore written in cooperation with 53 authors from the special interest group “Man-Machine-Interaction in Safety-Critical Systems” of the Gesellschaft für Informatik (German Informatics Society).

„The purpose of the book is to pick up topics from research and disseminate them into teaching“ says the editor of the book and founding spokesman of the corresponding GI group Professor Reuter: „Our book consists of a comprehensive reference work to give an overview on the prin-ciples and methods, but also to conflate the current state of research“. In addition to the target group of research and IT development for authorities and companies, the book is also designed to be used as a teaching material addressing for students of computer science or peace and con-flict studies. It also offers exercises for students as well as educational material for lecturers. 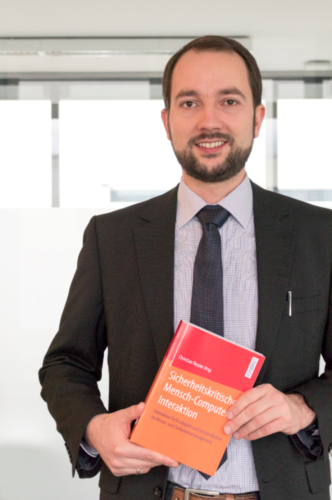 On 645 pages in 30 chapters, the principles and methods of usable safety and security engineering, as well as related issues of law, ethics and culture are treated. Subsequently, safety-critical interactive systems are discussed, for example to maintain the viability of increasingly connect-ed production networks (Industry 4.0), crisis management systems for public authorities, as well as warning and assistance systems, such as the NINA or KATWARN alert apps designed for public security. Finally, the book focuses on cooperative applications that serve the collabora-tion of multiple actors, either private individuals, government agencies or organizations. This includes, for example, the effective use of social media in crisis and conflict situations, as well as applications for the targeted involvement of volunteers in major loss situations. For this pur-pose, the increasingly important field of IT in peace and conflict situations is presented, on the one hand addressing widespread fake news on the internet and opinion manipulation, and on the other hand IT for the propagation of pluralistic viewpoints in the context of limited freedom of speech and of the press.

The editor Christian Reuter is professor for „Science and Technology for Peace and Security“ (PEASEC) at the Department of Computer Science of the Technische Universität Darmstadt as well as initiator and mentor of the BMBF-working group KontiKat. He is the founding speaker of the expert group „Man-Machine-Interaction in Safety-Critical Systems“ in the Gesellschaft für Informatik and has already published more than 100 scientific publications in this field.

The special interest group „Man-Machine-Interaction in Safety-Critical Systems“ (FG MMI-SKS), founded in 2015, is part of the Gesellschaft für Informatik (German Informatics Society), which is the biggest organized representation of its kind in the German-speaking world.

The publication of the work is publicly funded in the course of the announcement “Civil Security – Promoting Young Investigators through Interdisciplinary Competence Development” by the Federal Ministry of Education and Research (BMBF) as a part of the Federal Government’s „Civil Security Research“ program.