The results of the survey we conducted have been picked up by the european commission and can be reviewed here in english and on the Publications part in our Website.

The EMERGENT project team are exploring how social media use can be integrated into emergency service response procedures during crisis situations. 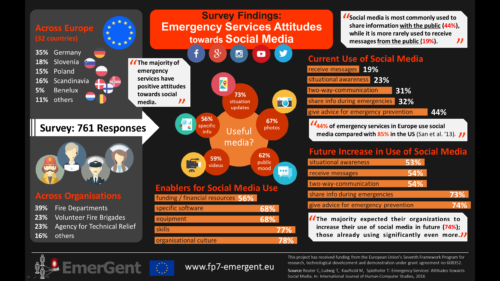 The majority of emergency service staff in Europe has a positive attitude towards integrating social media into emergency management processes, an EU-funded survey has found. Attitudes differ, however, depending on gender, age, and geographical location. For example, young female staff and those based in countries with high levels of social media use are significantly more likely to express positive attitudes. The survey, carried out as part of the EMERGENT project, questioned 696 emergency service staff across 27 European countries, has just been published. The main aim of the survey was to explore attitudes towards social media, and to identify the key factors influencing current and likely future use of social media in emergency response organisations. The popularity of social media platforms has changed forever the way in which people communicate. During crisis situations, ad-hoc communities now form around social media – through a new Facebook page or a Twitter hashtag for example – providing a valuable means of disseminating and sharing the latest information. This was the case during the Love Parade disaster in Duisburg, Germany in 2010 and when Hurricane Sandy hit the east coast of the US in 2012. One issue however is that these communities are often not connected to the emergency services, and they are therefore unable to capture potentially valuable information being shared on social media. Although existing social apps (for example on mobile devices) are sometimes used by citizens to share their observations and feelings, these are only weakly connected to existing emergency management systems. The EMERGENT project, which began in April 2014, aims to find ways of identifying and integrating valuable and reliable information from social media into emergency management processes, in order to achieve greater responsiveness. The project began by studying the positive and negative impact of social media during emergencies, and examining how people behave on social media during a crisis. The objective is to achieve a more accurate assessment of how emergency services can integrate these new communication channels into their procedures. Understanding the nature of critical situations, the reactions expressed through social media and the preferred types of social media will all be considered. For this research, new tools are being developed to reinforce communication between citizens and the emergency services. To handle the vast amount of valuable and distributed data for example, new methods for information mining will be used to classify and rate publicly available data. Impact assessments consisting of case studies and analyses of emergencies in the past where social media played a crucial role will be carried out. The results of all this work will go towards the creation of new communication guidelines. The impact of social media in emergencies will also be assessed through continuous citizen and emergency service involvement in social media and workshops. The EMERGENT project, which has received EUR 3.3 million in EU funding, is scheduled for completion in March 2017.

The European Commission published results from our survey among ES